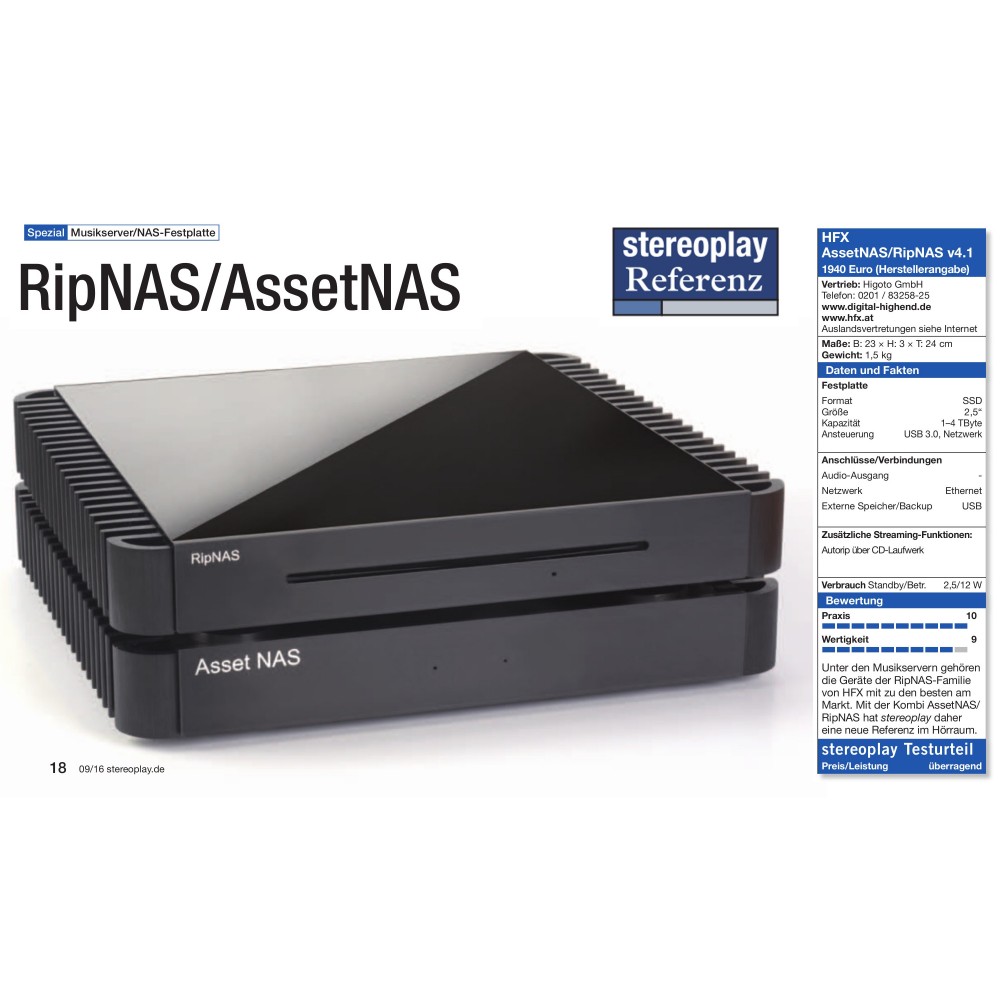 The AssetNAS D5  is a product of RipNAS family. Its dimensions are very compact (only 3 cm high and 24 cm wide) and can be configured up to 4TB SSD. The AssetNAS D5 is designed for error-free storage of high-resolution material on SSD. As a player, AssetNAS supports both gapless play and DSD files.

+++ highlight! The mainboard is equipped with solid capacitors from the AUDIO area. +++

The AssetNAS D5  is a product of RipNAS family. Its dimensions are very compact (only 3 cm high and 24 cm wide) and can be configured up to 4TB SSD. The AssetNAS D5 is designed for error-free storage of high-resolution material on SSD. As a player, AssetNAS supports both gapless play and DSD files.

High-end audio server (Asset + Roon): The currently best audio server, the asset UPNP server, is used. This supports all high-resolution formats, as well as the DSD format. DSD files are converted to PCM format on the fly for playback on any player. Native DSD playback is supported by the optional JRiver Media Center. In addition, the asset UPNP is the only one who shares all the information in classical music, such as conductor, composer, soloist and many more (full support of the Sonata database). ROON server is also preinstalled.

Automatic backup: as soon as an external hard drive is connected via USB, a backup is automatically made daily. A backup can also be made to a network drive. The backed up data is unencrypted on the hard disk.

High end player (KODI, JRiver, Roon):  KODI is already preinstalled. It is operated with an app on an iOS or Android tablet or smartphone. Optionally, JRiver can also be installed for native DSD playback. The output can be made via an analogue output or USB. More and more DACs support the control via USB, in which the digital data can be received unchanged from the DAC. An analog output is also preset via the front headphone output. If a DSD-compatible DAC is connected to USB, the optional JRiver can play native DSD files. Supported audio formats: FLAC, Apple Lossless, MP3, AIFF, WAV, DSF, AAC, WMA and more.

DSD support: The AssetNAS D5 optimally supports the streaming and playback of DSD files. The Asset UPNP server converts the DSD files to PCM un-fly, enabling all UPNP players to play them. In addition, the AssetNAS also supports editing the metadata of DSF files. If a DSD-enabled USB DAC is connected, even native DSD playback (without conversion to PCM) can be performed. The offered JRiver player support native DSD.

One server for all: AssetNAS D5 is a server for all UPnP / DLNA streaming clients, Sonos, Logitech Squeezebox and many more. Every known file format is supported by the server, on-the-fly transcoding is possible.

ROON  brings together music collections from various sources such as iTunes, Tidal, and the RipNAS collection, and supports a variety of network players. Try 60 days of free pre-installation on our RipNAS and AssetNAS.

>> optional JRiver or ROON as player

German as language is the default. But it is easy to switch to other languages.